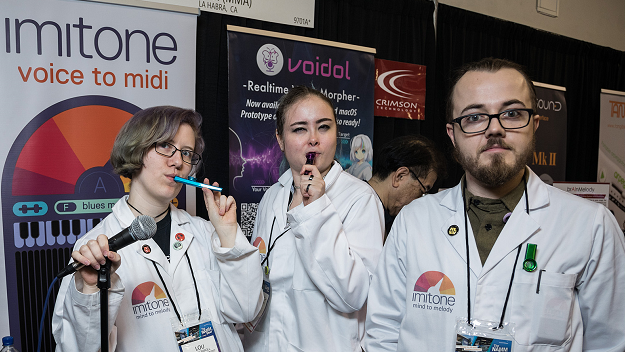 Since January, and through the chaos of 2020, I have been making radical changes to the way I do things.  Or rather, how we do things — this year’s biggest development is that imitone’s day-to-day team has grown from one to four.

This has been one of the busiest periods of my life, and I can’t hope to summarize it in a single post.  Instead, I’ll give a quick overview of the year’s developments.  I’ll have more to say about each topic in future updates — from here on, I’m aiming to write small updates about twice each month.

imitone’s day-to-day team is now four people plus two consultants.  We are distributed, but three team members (including myself) are in the Seattle area.

That’s me!  Over the last few years, I’ve found myself spread very thin as I pursue all the things I’d like to do with imitone.

A gentle soul who wanders the cliffs of South England with a sheepdog named Bill.  Metalhead.

Professor of game design, labor activist and co-founder of a co-op crowdfunding platform.

Lou is a software developer and generalist with a background in voice resynthesis technology “UTAU”.  They are learning to develop audio applications with a focus on manipulating the human voice and will be helping with various aspects of imitone development and community.

Internet lizard, jack of all trades and trainer of singing robots.

Isaac is a videogame composer and professor of music.  They are helping us to interface with experts in musical traditions around the world, and to build a datamodel for supporting those traditions in imitone.

“If my life was a tarot deck, the suits would be cats, babies, synthesizers and accordions.”

imitone:  Our main project, obviously!  imitone is a voice-to-MIDI application in development for PC, Mac and plugin systems, which will eventually grow to Linux and mobile.

Team:  My biggest project of 2020 has been growing the imitone team, which involves starting a few new projects as well as delegating some of my own responsibilities so I’m not spread so thin.  This is a huge time investment, but after seven years working alone I’ve come to respect my limitations.

NAMM:  The world’s largest music tech convention.  We had a delightful showing in January 2020, debuting our new technology and winning an innovation award.  We will not be attending in 2021.  😷

Technology:  Research and development into imitone’s voice pitch recognition and music transcription technology.  This has been the subject of several previous updates.

Community:  The team is interested in making imitone development into a community-oriented process involving activities like modding and MIDI scripting.  We’ll have more to say about this later!

Tutorials:  A series of imitone tutorial videos which will eventually detail how to set up and use imitone with various music-making apps, how to get the best results with it, various musical recipes and more.  See our library:  youtube.com/c/imitone_team

MIDI 2.0:  imitone uses MIDI to control musical instruments.  The next-generation MIDI 2.0 standard is more precise and will allow imitone to automatically learn about and adapt to the instruments you play.  It is developed by an industry association that holds several meetings each week.

Music Modeling:  Research into scales, tuning systems and musical traditions from around the world, how to model them, and better ways to transcribe singing into musical scores.  A collaboration with professor Isaac Schankler and a growing list of tradition experts.

Sandvox:  Working title for Lou’s apprenticeship project, a moddable freeware speech training and research application with an emphasis on gender expression.  It will use imitone technology to visualize the user’s voice and facilitate creating and sharing voice lessons.  (Thanks to Dr. Alex Ahmed of Project Spectra community for research and resources.)

SoundSelf:  An eight-year collaboration with sound designer Robin Arnott.  It harmonizes with the pitch of your voice and the rhythm of your breath to produce a shifting visual soundscape that guides the user into a deep and meditative trance.  It may be played with a VR headset or on an ordinary screen.  It was released in April 2020 and continues to evolve.

A free trial is available at soundself.com.

My work logs provide a bird’s-eye view of how projects have competed for my time over these months:  imitone is orange, SoundSelf is purple, MIDI 2.0 standards are gold, while Sandvox and phonology research appear in pink.  A few other company and personal projects appear here and there.

What we’re building toward is something I’ve tried and failed to achieve several times as a solo developer:  regular, substantial updates developed in active conversation with a community of imitone users.  Previous attempts at this were only sustainable for three to eight weeks at a time, usually related to public showings, and contributed to a technical debt which we’re now working to undo.

Technology, Music Modeling and MIDI 2.0 give us a basis for features and improvements to imitone — putting them together creates a roadmap for the next stange of development.  Side projects Sandvox and SoundSelf provide opportunities to explore new possibilities for the tech, which often lead back to improvements in imitone.  Tutorials and Community building make the app easier to use and drive sales which fund the Team.

A Word on Overwork

Since late October I have consistently worked 6-day or even 7-day weeks without vacations, to the detriment of my health.  As of this month I’m attempting to adopt a 5½ day week, and while writing this article I decided to attempt a few days of much-needed time off, with mixed success.

There’s no glory in overwork.  It’s not a behavior to emulate, and it is remarkable that I have been able to maintain a baseline level of productivity so far.  It certainly wouldn’t have been possible to do so without members of the team reminding me regularly to pace myself, and compensating for some of the short-sighted decisions I tend to make when I’m doing this to myself.

The effects of overwork range from the obvious fatigue, to a lack of foresight or hindsight, and into stranger things:  for example, forgetting how to do things you once enjoyed — or doing them joylessly, as tasks.  It is true on many levels that we become what we do…  If what we do is a means to an end, then we become the means, and the end becomes distant until it’s almost forgotten.  We become that endlessness.

Ordinarily I take a few opportunities each year to step away from my work and attend creative gatherings.  Since March that has ceased to be an option — with good reason.  One such event, a game writers’ conference which I have had a passionate interest in for years, moved online.  I could have attended, and would certainly have enjoyed it.  It would have been an opportunity to step back, reflect, become healthier and wiser about my work…  But, surrounded by my tools, I didn’t feel I could excuse myself from my duties.

I tell myself I won’t make that mistake again, but it’s a learning process.

Stay safe, friends, and take care of yourselves.